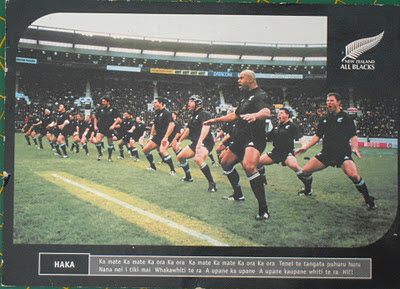 The New Zealand All Blacks won the World Cup Rugby championship held in Auckland New Zealand.  For those familiar with the All Black, you are aware that they start every match by performing the Haka.  A friend from New Zealand sent me this wonderful card.  Sorry I don't know which year this was taken.  If you aren't familiar wit hthe Haka it is a war chant done before battle to put fear in to the opponent.  Following are two examples.  The second is for pure entertainment and to show you how important this chant or rather large assortment of chants is to the people of New Zealand.