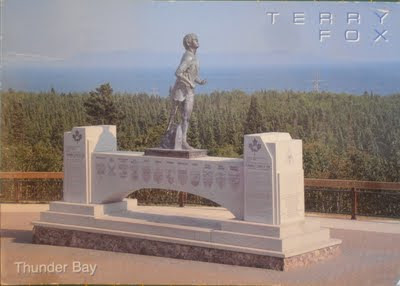 Terry Fox is one of the most known and beloved of all Canadians.  In 1981 he started his cross country.  For 143 days he ran a marathon, that's 26 miles a day for 3, 339 miles until he was too sick to continue.  His cancer , which earlier had claimed his right leg, was back.  This monument in Thunder Bay, Ontario marks the location where Terry stopped running.
I remember watching the news for updates on his progress and being devastated when he had to stop.  even though he had to stop, his memory remains.  Every September, thousands of Canadians lace on their shoes and run.  To date, runners around the world have raised $550 million for cancer research.
To learn more about Terry Fox and the Foundation named for him, visit the website.
Be sure to visit yesterday's post by Nancy to comment for a chance to be mailed the Inukshuk postcard.
Posted by Heather at 9:08 PM