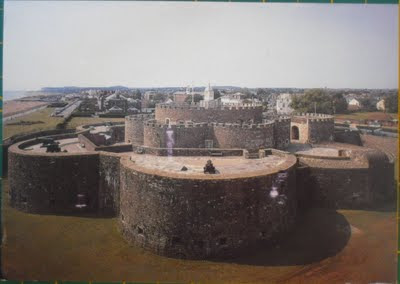 "Deal Castle, completed in 1540, was one of a series of fortresses built to defend vulnerable landing places on the south coast from an expected invasion.  Unlike medieval castles, these were specifically designed to resist and be defended by guns, firing from embrasures in the walls and parapets of the low, rounded towers or 'bastions'.  The castle is seen here from the north, showing the inner and the the outer ring of bastions with the 'keep' at the centre, much as it looked in the 16th century."
Thank-you to Sheila, from A Postcard a Day,  for this wonderful postcard.  Sheila was the winner of the Year of the Rabbit postcard contest held earlier this year.
Did you enter our current contest?  My sister Nancy has offered to send a postcard featuring an inukshuk to one lucky reader.  Visit this post and leave a comment to be entered.  Don't forget to leave a comment for PFF as well.

PostCard Friendship Friday is hosted by Beth at The Best Heart are Crunchy.
Posted by Heather at 8:00 AM


Be sure to leave a comment and you might be selected as our next recipient of a postcard in your mailbox. We have to have a way of contacting you, so include your email in your comment.