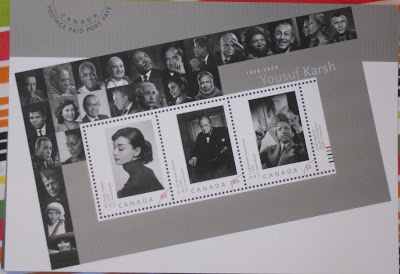 Did I mention that my son is studying photography at college.  As part of the course, he has to prepare several presentations on successful photographers.  One person that he has learned about is Yousuf Karsh.
My son told me a story about the central image of Winston Churchill.  He related that the photo shoot had been going on for a lot longer than Mr. Churchill expected.  He lit a cigar and was smoking it.  Mr. Karsh walked over to him, took the cigar and threw it out.  That is why Mr. Churchill has such an expression on his face.  True or not, a good story.

For more postal fun, be sure to visit The Best Hearts are Crunchy for Postcard Friendship Friday.
Posted by Heather at 8:00 AM

Email ThisBlogThis!Share to TwitterShare to FacebookShare to Pinterest
Labels: sent